Some searches are destined to go smoothly, this is one of them. I hate to let Bill know that it took less that 7 minutes from start to finish.
It began this morning with a referral from the WA RSL. Arron S had come across the medal in a coin collection left to him by his father in 1979. There was no family connection to Arron so he contacted the WA RSL and then emailed me. The medal is a WWI British War Medal awarded to 277 Private Charles Gorringe who served with 10 ALH Regiment. Charles was 38 when he enlisted but had already served 12 years in the 10th Hussars, seeing active service in the Boer War. Enlistment date for Charles was 20 October 1914 making him one of the original members. Any one who has seen the movie Gallipoli will know that the AIF trained in Egypt prior to moving on to Gallipoli. It was during this time that the mounted infantry units were re-rolled as infantry and left their horses behind. 10 ALH Regiment arrive at Anzac Cove on 21 May 1915. One of the first action 10 ALH Regiment was involved in was at Walker's Ridge. At this location, on 16 June 1914, Charles received a shrapnel wound. I've searched the unit war diaries but there is no mention of his name. The war diaries notes that a Corporal was killed by an explosion on that date so Charles might have been wounded at the same time.His service record shows periods of hospitalisation for illness and then in 1916 he transferred to the 28th Battalion, AIF. He was further wounded twice while fighting in France as well as suffering outer illnesses. Charles was discharged in 1917 being medically unfit.
Charles and his wife Elizabeth had four children. One was Reginald William, his son is Harrison Reginald who I located in Perth. I've spoken to him today and his grand father's medal will soon be returned to the family.
Thank you Arron and Royceton.
The returned medal tally is now 2006. 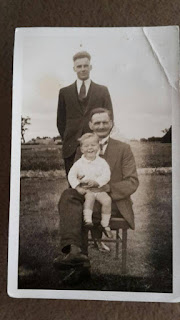 A young Harrison on his grand father's lap. Reginald is int the back ground. 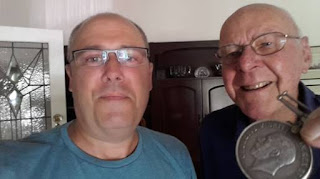 Thank you Arron for providing these photos.
Posted by Lost Medals Australia at 15:20