Cecil Thomas Westwood was born in Lincoln UK in 1917, the son of James and Edith (nee Broadbury) Westwood. During WWII Cecil served in the Merchant Navy. He later moved to New Zealand and continued his career as a marine engineer. He was married to Mairi Mackinnon but there is no evidence that they had any children. I've located a relative in NZ and will send them this collection shortly.
Cecil's miniature medals, his passport and several other persona items were found by the staff of the Townsville St Vincent de Paul's.
Thanks to Alicia for sending this collection to me.
The returned medal tally is now 2005. 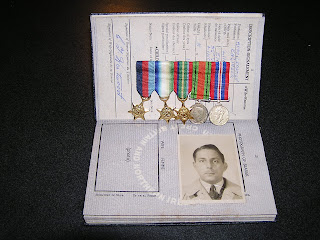 Posted by Lost Medals Australia at 19:52