I have recently received a parcel from a retirement home in Victoria which contained six medals and other memorabilia from service during WWII. The medals were awarded to VX143861 Arthur Richard Hadler. Mr Hadler died in 2010 and from information I received from the retirement home and what I could piece together from newspaper entries, Hadler had no immediate family still living. I cast the net a bit wider and found a member of the Hadler family to return the medals to.
What makes this group interesting is that the medals are an official duplicate set. They are marked with a (D) and are lazer engraved rather than impressed as the originals would have been. As well as the standard WWII group, there is an Australian Service Medal 45-75 which I know was issued to Hadler in 2007. I suspect that at some point Hadler has lost his original medals and applied for a duplicate set and as a result the ASM 45-75 was also issued.
The pictures show the naming style and the duplicate D marking.
The returned medal tally is now 884. 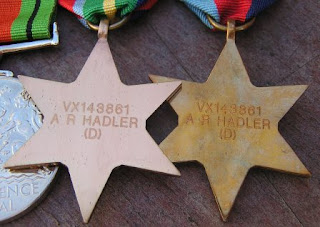 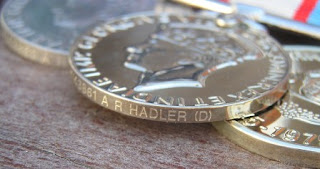 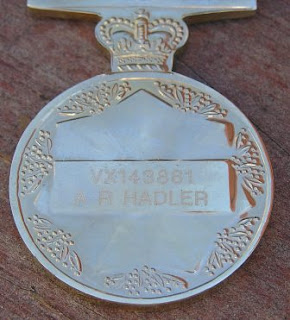 Posted by Lost Medals Australia at 12:37