3378 Henry Ernest Miller had what can only be described as an entertaining war. His service record details several offences of AWOL. He must have enjoyed himself while out on the town as there are details of the consequences of socialising with the local ladies. He was also wounded in action.
Originally posted to 15th Bn he later transferred to the Australian Army Medical Corps - Dental Service.
This medals was one of the very first that was donated to me by the Queensland RSL in 2001 so we have had it for some time.
The medal returned tally is now 622. 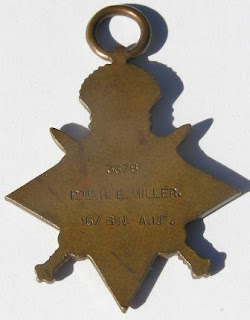 Posted by Lost Medals Australia at 13:08