The British War Medal awarded to 2624 Sapper William Morrison Bowels seemed unremarkable when it was first sent to me by Peter M. That was until I saw the unit which is impressed after his name. It says RLY UNIT. I think this is the first Railway Unit medal that I've dealt with.

When he enlisted in 1917, William was allocated to the 2nd Light Railway Operating Company. This is most likely because he was a fitter by trade. The Virtual War Memorial web site provides the following description of the unit:

The raising of these units coincided with the implementation of a battlefield rail strategy across British and Commonwealth Areas of Operations.  The widespread use of battlefield rail, particularly the narrow gauge rail network transformed supply, personnel movement and casualty evacuation.

The Light Railway Companies were operated by the Engineers and came into existence when it became clear that the maintenance of roads was becoming a severe problem, in terms of the manpower needed and enormous quantities of road stone clogging up the supply routes. In February 1916 the first new light railways were sanctioned.

I very quickly found William on an Ancestry tree and a message to the owner and confirmed a direct connection to William.

Thanks to Lee-Anne for the connection and to Peter who sent me the medal. The returned medal tally is now 2677. 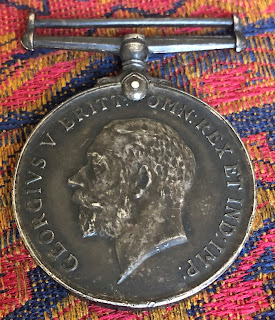 Posted by Lost Medals Australia at 11:21