This search stated with an email from Ivan at RSL NSW HQ. Ivan sent me a WWII group of five medals and a set of dog tags that originally came from the Weston RSL sub-branch. Weston is in the Hunter Valley and this location made a lot of sense as the research progressed.

The medals were awarded to NX23081 George Arthur Collingwood. George was reasonably easy to follow through the electoral rolls as he lived at only two addresses in Weston from the 1930s through to his death in 1975. Also at these addresses were George (snr), Elizabeth and Ernest Edward Collingwood. While this information was very straight forward things got confusing based on information on several Ancestry family tress that had the names right but almost every other detail wrong.

It was a heavy trawl through the records but I worked out that George (snr) and George Arthur emigrated to Australia in the mid 1920s. Father and son settled in Weston. Elizabeth and her other son Edward followed a bit later and arrived in Australia in 1926. Arthur and Edward worked in the coal mining  industry all their lives. They lived together at the same address all their lives. Neither brother married. George (snr) died in 1953 and Elizabeth in 1964. Edward sold the family house in 1991 and died in Newcastle in 1995.

The research was really going off he rails as I bounced from family tree to family tree which showed that George and Elizabeth never left the UK or gave dates which didn't match the official records. I finally got to a tree which had the correct details and dates that aligned with what I knew to be true. This tree belongs to Tony who is a relative of the Collingwood family and lives in Victoria.

Even though the medals are well mounted, I suspect that Arthur also received the 1939-45 War Medal but it isn't included in the group. Thanks to Ivan for sending me the medals. The returned medal tally is now 2592. 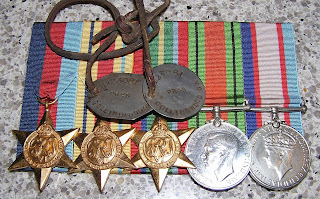 Posted by Lost Medals Australia at 10:11