I recently received an email from Margaret P who found a WWI Victory Medal among her late brother's possessions. Margaret's brother lived in North Queensland but she wasn't sure how he came to have this medal.

The medal was awarded to 5864 Private David Christopher Mytton. David was part of the Australian Veterinary Hospital. While there was a large requirement for veterinary services during WWI, it isn't often that I see medals to a unit like this. David was almost 45 years old when he enlisted in 1916. He was from a reasonably large family who lived in England. David emigrated to Australia and was a Tin miner around Charters Towers. There is no evidence that David married and based on the fact that his NOK was his mother, I'm confident that he remained a bachelor all his life.

As part of my research I found several news paper articles that mention David. I've added them here as well as his death notice. The lost item advertisement, placed in 1949, is interesting. I wonder if his medals were in the port when it was lost? For those who have never lived in Queensland, a port is a bag. David died in 1953. 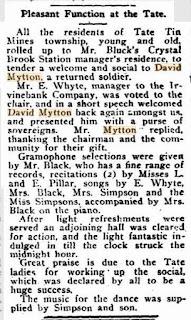 I quickly found David on an Ancestry tree and was soon in contact with a decedent of David's brother John. Margaret is now in contact with the family and David's Victory medal will soon be sent to them.

The returned medal tally is now 2587.

Posted by Lost Medals Australia at 16:58