I received the WWII War Medal and Defence Medal awarded to NX27358 Bede Joseph Sullivan from Helen D who tells me the medals were found amongst the possession of a deceased relative.
Bede married but had no children. His sister married but she also had no children. Their brother Arthur didn't marry.
I then had to turn to the family of Bede's father William. He was from a large family and I found a trail through William's sister, Catherine. She married William Brennan and it is their grandson, Don who, thanks to another family member, I've been in touch with. Don tells me that he remembers the Sullivan family living in the same NSW regional town as him.
While doing this research I found that one of Bede's cousins was William Gregory Brennan died of wounds he received at Gallipoli. This is his obituary.
Thanks to Helen for sending me the medals and to Jezella for connecting me with Don.
The returned medal tally is now 2366. 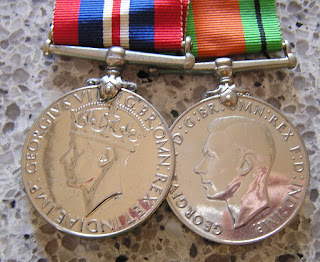 Posted by Lost Medals Australia at 13:36