This is a first for me.
When I return a broken group of medals, for example one medal out of a WWI trio, I'm often asked where the missing medals might be. That is a really hard question to answer. Individual medals from a group might have been given to separate children or sold off during the Depression. One reason that the British War Medal is often missing is that it has a high silver content and as the price of silver has increased the medal has been melted down. What is a first for me is that I've been contacted to reunite a BWM with a broken group that I've previously returned.
The original story is from 2013 when I returned the 1914-15 Star and Victory Medal awarded to Ernest David Davies also known as David Ernest Davies. My communication with Ernest's grandson, Keith was really exciting and I was even provided a photo of Ernest's son with the medals.
I had thought that this story was over until yesterday when I received an email from Judith S who had found in her recently deceased father's possessions, Ernest's BWM and two boxing medallions. Judith had done a search of Ernest's name and came across my website entry from 2013 which listed his medals that I was looking to return.
This is the first reunite I've been involved with that completes a set of medals that I had previously returned. It really is quite exciting. Well done to Judith for going to the effort to find out who Ernest's was and taking the next step of returning these items to the Davies family.
The returned medal tally is now 2313. 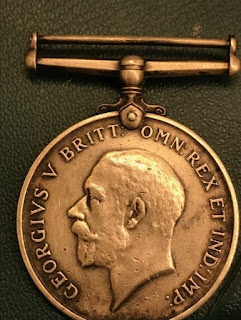 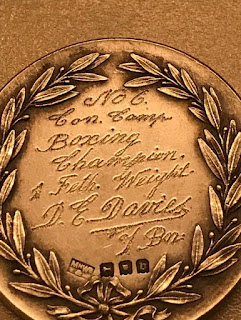 Posted by Lost Medals Australia at 18:13