I never ceased to be amazed at the ever expanding ripple effect that results from one small research effort.
These two medals came as part of the Grafton Box and were awarded to 373 Aiken Spence.
What immediately struck me was that the 1914-15 Star gave the unit as 7th Light Horse Regiment and the British War Medal has the unit as 12th Light Horse Regiment. Aiken's service record shows that he was initially enlisted to the Light Horse Reserve before allocation to 7th LHR then later transferred to 12th LHR. Aiken served at Gallipoli and in the Middle East.
The service record also threw up more facts than I hadn't expected. Late in the war Aiken was Mentioned in Dispatches. This was not the only award made to this family but more on that later. Also there is correspondence from the 1950s requesting a replacement 1914-15 Star. However, the Star I have is not impressed as a Duplicate or Replacement.
With a name like Aiken Spence I thought that the research would be relatively straight forward. However, due to his name being spelt as Aiken, Akien or even Atkien things got complicated. What I could work out was that following WWI, Aiken married Amy Doris May but this marriage ended in divorce in the 1930s. Spence later married Ivy May Bale in 1939. I couldn't find any evidence that Aiken had any children. He died in 1964 and is buried in the Grafton Cemetery.
I then took the search to his siblings; William, James and David. No one in this generation of the Spence family had middle names which made the research that much harder.
William and David were hard to follow so I focused on James which proved to be very interesting.
Aiken's brother was 1244 James Spence DCM, 33rd Battalion AIF. James was awarded the Distinguished Conduct Medal:

'For conspicuous gallantry and devotion to duty in organizing a party and attacking a strong hostile post, capturing it and a machine gun, and bayoneting the whole garrison. His fearlessness and determination throughout the operations set a magnificent example to his company.'
Source: 'Commonwealth Gazette' No. 219 Date: 20 December 1917

James also served during WWII as N75462 SGT J Spence DCM. This record gave me his NOK name as Effie. Finally I had a name which was far easier to narrow down. The electoral rolls confirmed where James' family lived and I found a picture of his headstone in the Tamworth Cemetery. This picture is below and includes the names of his daughters: Mary, Barbara and Betty. I found Effie and Barbara at the same address in the electoral roll. It was only the one entry and for the year before Barbara married. It really was a piece of luck and it also provided Barbara's middle name of Wynn. From here the search was easy.
Barbara Wynn Spence married Milton Clifford Taylor and they settle on the NSW Central Coast.  The last available electoral roll on Ancestry is 1980 and this entry included the name of their son. Barbara died in 2010 and Milton in 2018. Milton had be a stalwart of the Everglades Country Club having a perpetual trophy named in his honour. His death was noted in the club news letter so I asked the club if they were in contact with Milton's son and if a message could be passed to him. I am extremely grateful to the Everglades Country Club for forwarding my email and I've recently been in contact with Aiken's great nephew and will be returning the medals shortly.
In the back of my mind I still have the question of where Aiken's Victory Medal might be and how the 1914-15 Star is the original rather then the duplicate. Questions that will never be answered.
The returned medal tally is now 2301. 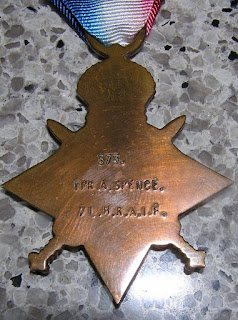 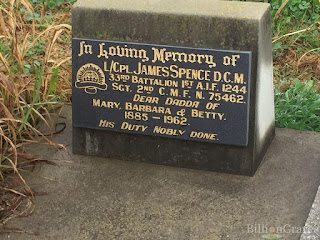 Posted by Lost Medals Australia at 12:10