This return was a collaborative effort between the WA Police, the WA RSL and Lost Medals Australia.
It started with a group of three medals being handed in to the Perth District Police Station. The Police officer who was handling the case put a post on Face Book which was shared with me.
While social media is great I do find that some well meaning comments actually hijack the search which, in this case, was further complicated with the number on the WWII medals not matching up with the same name on the WWII nominal roll.
The group also consisted of a RAAF Long Service and Good Conduct Medal which had another number on it. The police provided the second number to me separately and I was able to confirm that the medals were awarded to A35311 Thomas James Hill. Through a source I have I was able to obtain Thomas' WWII RAAF service record which gave me the names of his wife and two daughters. This was all provided to the police. The WA RSL were able to track down one of Thomas' daughters and she has now retrieved the medals. I'm hopeful that this lady will contact me soon and I'll provide her with a copy of the service record.
The returned medal tally is now 2305. 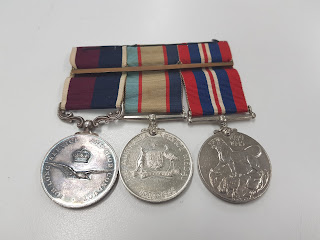 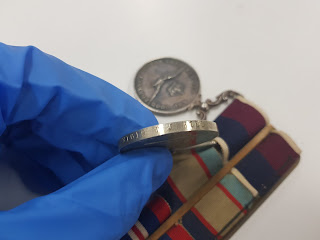 Posted by Lost Medals Australia at 12:22