The Grafton Box is really throwing up so interesting medals.
This is the second medal sent from the Grafton RSL awarded for Boer War service. The first was a Queen's South Africa Medal awarded to Trooper Tom Barnes of the Australian Horse. This Queen's South Africa Medal, with five clasps, was awarded to 353 Trooper Thomas John Biddle, New South Wales Mounted Rifles.
The NSW BDM and the electoral rolls gave me all the basic information: Thomas was born in 1875, he was married to Ethol McIntosh and died on 3 Feb 1957. Then I discovered a gold mine of information when I found Thomas' obituary on Trove. What this told me was that Thomas was a police officer who was posted to numerous stations around NSW. More importantly it gave me the names of Thomas' children. One daughter was Myraa (Mrs A Snow) of Mullumbimby NSW. The electoral rolls, which aren't available online after 1980, provided just one entry which gave me a clue to the next generation and this was the name of Myraa's son. This was Peter Snow and once again it was only one entry on the internet that confirmed for me was that Peter also lived in Mullumbimby. Even though Myraa died in 2004 there is still an entry in the White Pages for her. I took a punt and called the number to find that Peter is at the same address. Peter recognised his grandfather's name as soon as I mentioned it so all my assumptions proved to be correct.
The returned medal tally is now 2282. 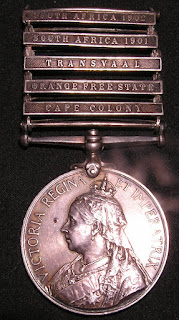 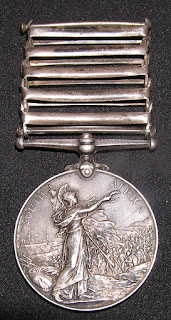 Posted by Lost Medals Australia at 15:56