It is sometimes just a single piece of evidence that we find that links one generation to the next and that finally leads us to a successful conclusion. That is definitely the case in the search for the family of J3200 AB William Arthur Castle, Royal Navy.
Finding the records of British service men is quite difficult. What wasn't destroyed during the Blitz is usually only available on a pay per view basis. I rely on an Ancestry.com membership to provide any information that might be available. Given the size of the British Army and Navy at the turn of the 19th century there isn't that many records available so I was very surprised when my search for William turned up his one page entry in the UK Register of Seaman's Service 1848-1939. The information this scrap of paper provided included William's date of enlistment, 1910, and the ships he served on until discharge in 1919. Thankfully, it also gave his date of birth and the location which was Forrest Gate in London's East End. What I couldn't find was a family named Castle in Forest Gate in the UK census records.
From there I had nothing. I had started this search in 2013 and revisited it on several occasions. Each time a new piece of information had been published on line which gave me that next clue. I found that William emigrated to Australia in 1923 with his wife Emily. That at least explained how the medal came to be here. Then nothing.
These last few days I've dug back in to this research and now have a result.
I found William's death and funeral notices published in a Melbourne paper in 1927. A copy of this clipping is included below. The clue I found from this brief entry was the address of William's brother. A search of the electoral rolls gave me the name of the brother. Using the Victorian death records I was able to locate where William is buried in the Box Hill Cemetery.
Armed with that brother's name I went back to the UK records and found that the brother was also born in Forrest Gate. This led me to an Ancestry family tree which didn't include William but gave me the name of other siblings and an even more revealing clue. From the Victorian state BDM records, I knew that William's mother's name was Sarah. The family tree gave the mother's name as Sarah Castle but the father's was John Kowalski. John was an Austrian emigrant. Using this new information I could follow the Kowalski's to other parts of the UK and helped me understand that the family didn't remain in the East End in the late Victorian period like so many other families did.
Back to the Australian records and I could quickly sketch out the families of both of William's brothers who emigrated to Australia. The first was Ernest Lawrence Castle and the second John Edward Castle.
It is through John Edward's line that I contacted William's great niece. The way I found her was through using her first and second name combinations, which is slightly unusual, this lead to me being able to make an conclusion about her married name. I found only one recent entry on the internet with this name combination. Through a third party I managed to get a message to the great niece and spoke to her this afternoon.
This was one of the more difficult searches of recent time but successful in the log run.
Thanks go to Josephine T who sent me the medal in 2013.
The returned medal tally is now 2272. 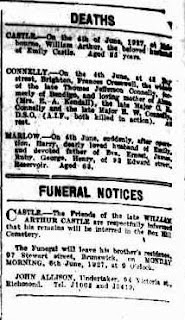 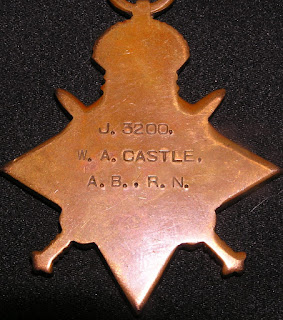 Posted by Lost Medals Australia at 17:30