10 medals to one family

For a whole lot of reasons we have been a little quiet on the research front. However, a recent Face Book request from the Victorian Police about 10 medals has had a successful outcome. Recently, these medals had been handed in after they were discarded in a park. The medals were awarded to:
3877 Thomas Watson Newton,
V144190 Robert Hilton,
WF96643 Beryl May Spooner.
Based on these names there was no obvious link to each other so I initially thought these medal formed part of a collection. Then the more I looked in to each veteran it became clear they were related.
Here are the connections I made.
I found Thomas Watson Newton's death notice from 1952. It does not mention a wife or children so he has no direct descendants. His siblings are listed as; John, Joseph (deceased), Robert, Albert, Margaret (deceased), Kitty, May and Eileen.
Kitty is Katherine who married Percy Hilton. Their son is Robert Hilton. Robert's son is Christopher who married the daughter of Beryl Spooner.
What I couldn't find was the most recent address for Christopher so I left that part of the search with the Victorian Police.
Today, I received the fantastic news that the medals were returned to Christopher and a picture of this event is below. It has been great working with Raelene from the Boronia Police Station on this search.
The returned medal tally is now 2146. 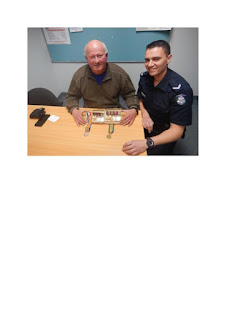 Posted by Lost Medals Australia at 21:00