58680 Daniel Francis Ryan was 33 years old when he enlisted in 1917. The unit listed on his medal is 7 Field Ambulance but he was also posted to a Veterinary Hospital for a period of time. Daniel died in 1952.
The search for a descendant of Daniel's was complicate by Daniel's daughter and then grand daughter marrying and I had to work out their married surnames. It was only though death notices and the electoral rolls could I follow each family up until 1980. What I did have was the name of Daniel' great grandson from the electoral rolls but finding him now was a little difficult. I had several options and only trough an educated guess did I find the right person on the first attempt.
This medal was one of several groups sent to me recently by Stuart H.
The medal returned tally is now 2147. 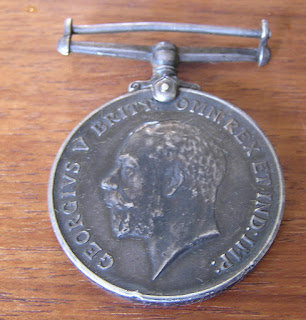 Posted by Lost Medals Australia at 09:29