I first published this story about Jim Peake in Feb 2015. There were several coincidence involved in the original return and I didn't think there would be any additional information. That assumption was turned on its head recently when I received a message from former soldier Russ Constable who had come across one of Jim's WWII dog tags while metal detecting at Lake Tinaroo in FNQ.
Russ tells me that this area of Queensland was used for training prior to the troops going off to the Pacific. Later the area was flooded when the Tinaroo Dam was built. However, recent drought conditions has caused the water levels to drop exposing parts of the lake floor for the first time in years. Russ got to work detecting this location and has found several items including the dog tag.
You can imagine Russ' surprise when he started researching Jim and came across my story. A letter from Russ arrived today and I'll forward everything on to Jim's nephew Bill.
The returned medal tally is now 1978. 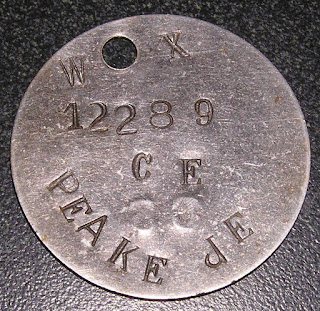 Posted by Lost Medals Australia at 15:16