This story from Bill shows the measures we will go to in a search for a family.


By now those who read this blog will be aware medals come from many sources, some with stories come with stories which only become fully known when we find the family.
Edward’s medals came from a storage company, where they had been carefully filed away since the storage unit was opened for non-payment of his account. Unfortunately, when Edward died in 2006, he had never bothered to nominate a seconder should anything happen to him. While the contents were sold to cover Edward’s outstanding account, his medals were put aside, in the hope that someday, somehow they could be returned to his family. This didn't occur and I found myself being presented with the medals in February of this year.
As you can see, the medals were originally set up for being placed in a display case. Unfortunately the case was, I believed, dropped, the glass broken and the medals then transferred to an envelope.
Edward had two sisters and five brothers and it was only through a slow and painstaking search that we were able to locate Margaret the daughter of his eldest brother Thomas. It was the team at the Australian Surname Group that gave me Margaret’s address from 2000. However by 2008 she no longer appeared under her maiden name on the Electoral Rolls. Which if she had married in this time would be the case.
In desperation, four weeks ago I went walking, starting with Margaret’s last address where the current occupants had no knowledge of her. Finally I got lucky, one of the occupants had move into the street just before Margaret moved on. While she knew little of Margaret, she did remember that ‘the lady in question (Margaret) often used to visit the lady in the house on the corner’.
Unfortunately, the owner of the ‘house on the corner’ was not home, and while I did leave a message it would take several visits till I was able to speak to her and ask her to contact Margaret to call me. It would be a week before I was able to speak to Margaret and another week before I could deliver Edward’s medals to her. It was only then that I found out that while Edward had been married, both his son and wife died early.

The returned medal tally is now 1975. 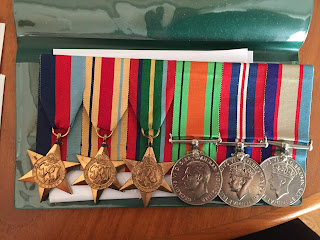 Posted by Lost Medals Australia at 13:42