When I discover that a solider I'm researching was killed in action there is always a feeling of sadness. This particular story took on another dimension when I realised that two sons from this family died within months of each other.
Victor Frederick Doran enlisted in 1915 and proceeded with 16th Battalion to Gallipoli. He was later selected for officer training and commissioned as a 2nd Lieutenant. He rejoined his battalion in April 1917 and then was killed in action on 11 June 1917 at Messines.
On the front page of Victor's service record I saw a note about 3101 Albert Phillip Doran so I had a look at his record. Albert was KIA on 20 October 1917. Both of the brother's records have copies of correspondence from their father trying to get more information or establish the whereabouts of their belongings. It is impossible to imagine what their mother went through having lost both her sons. It is probably not surprising that both soldier's memorial plaques have been attached to their parents headstone.
Although this family originally came from Echua they moved to WA where the Doran brother enlisted. At some point in the 1920s the parents must have moved back to Victoria. The medals were sent to me by Barry who runs a medal mounting business in WA. Barry had been given the medals by a client who hadn't realised that this group and another weren't awarded to relatives.
The returned medal tally is now 1977. 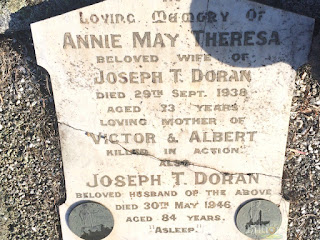 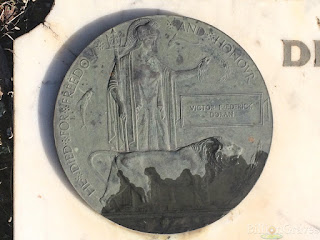 I have very kindly been provided a photo of a plaque that was placed in memory of the Doran brothers and a news paper article about it. 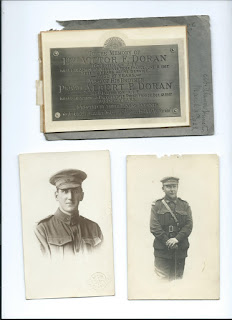 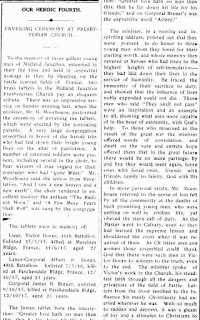 Posted by Lost Medals Australia at 14:34