This is another really impressive result from Bill with help from The Australian Surnames Group.

Searches start in many different ways. The search for the family of 410428 David Paterson Anderson, who served as a bomber pilot with the RAAF during WW2, started with an email from Michelle the receptionist at the Watsonia RSL
‘Hello Bill
I am not sure if anyone has emailed you.  There are some medals here in a plastic bag at reception with your name on them.
Ta
Michelle’
The story, it later transpired, was that a lady had dropped the medals off at the RSL, saying briefly that a plumber working under a floor had found them and could we return them. She had then left without giving any other details.
That is when the fun started. A name like David Paterson Anderson would tend to give way to a certain degree of uniqueness. However, as The Australian Surnames Group and I found, there were three men named David Paterson Anderson, all of who died within a short space of time. Unfortunately, War Graves was unable to give a date of death for David which complicated things. I would love to be able to claim the credit at this point but I must defer to the team at The Australian Surnames Group, particularly Kerrie, Liz, and Jenn. Who together were able to separate the three men, something that I had not been able to do. Now, while the team were able to access Ancestry, it eventually took them off shore to England, then back to Australia and finally to South Australia where David’s daughter Carole resides.
Our search has had two endings. The first was a 20 minute phone call between Carole and I as we went through her family, to which I added how we eventually found her and what little I really knew about how the medals had been discovered. The second will be tomorrow, Saturday, when I wander down to the Watsonia Post Office to mail back to Carole her father’s medals, along with the name and address of a medal mounter, who will not only remount the medals, but will be able to clean them and remove the verdigris, far better than I can .

The returned medal rally is now 1832. 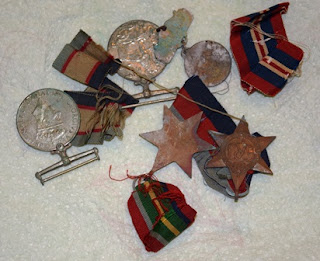 In my previous post I said the story had two endings, well I was wrong, it
had three. The third was when the medals were returned to the family after
restoration and remounting, to say the family is overjoyed, is to say the
least, as his daughter Carole said in her email:
'I have had the medals cleaned and mounted on a pin.  They cleaned up really
well considering the condition they were found in. Decided not to court
mount, as wanted to be able to see all the back of the medals.
Again THANK YOU ALL SO VERY MUCH for tracing me and returning them to our
family. My brother, our sons and grandchildren are absolutely delighted to
have the originals. One grandchild will wear them next Anzac Day March.
My father also received the ROO MEDAL for bailing out of an aircraft.  That
is also missing.  (We remember it well, as kids growing up in Melbourne). It
was issued by the Dominion Parachute Company to all who bailed out using
their parachutes.  I have the letter written by my father describing the
incident.  Incidentally the only letter written by him (that we have) during
his time in the Air Force, a photo of which I have included.'

This is a picture of the reconditioned medals. 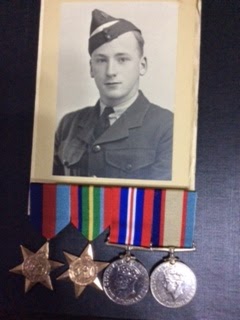 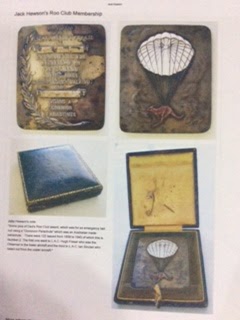 Posted by Lost Medals Australia at 10:45