This search has probably been one of the most taxing I have completed. In the end it was broken down in to three distinct areas. First, who were the medals awarded to, second, who was the officer and finally who was his family?
Following the ACA story on Anzac Day 2013 I was contacted by Bev and John S. They had two medals that had been recovered many years ago from a house that a relative of theirs cleared out on behalf of the Master of Lunacy. A bit of digging showed me that this was a common term used by the Supreme Court of NSW for the Office that acted on behalf of those unable to look after their own affairs due to mental incapacitation.
When the package from Bev arrived I received the first surprise. The package contained a cased Military Cross and a British War Medal. The MC was not engraved at all which didn't surprise me. The BWM was simple impressed to LIEUT L Owen. Not much to go on. A search of the Australian WWI MC recipients didn't offer up any likely candidates. So I started to look at British Officers. Once again there was no immediate answer to this problem.
On a hunch I looked at the Australian WWII nominal roll and found a likely candidate. This was N280817 Lancelot Owen, born in Terfriw Wales in 1888. The sums added up that this man could have served during WWI. However, a search for Lancelot Owen didn't lead anywhere.
I enlisted the help of the British Medals Forum membership and was soon pointed (by Kay) at a possible link in the London Gazette. This was the break I was looking for. The entry was about the awarding of the MC to T/LT Launcelot Owen. The spelling was slightly different and might not have been my man. It had taken me three days to get to this point. This is the citation. 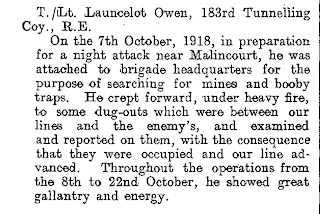 The next step I took was one I should have taken when  found that Launcelot served in the 2nd AIF. I searched the National Archives of Australia website and to my surprise found that Launcelot's WWII service record had been digitised. This record confirmed the citation was for the right officer, it gave his wife's name, his WWI service history, that he had received the MC and was Mentioned is Dispatches. However, it was the letter on page 20 that provided many answers as well as posing more questions.
The letter was from the Master's Office of the NSW Supreme Court, other wise know as the Master of Lunacy. I have added the letter below but the most interesting bit of information was that Launcelot was lost without trace in a plane accident to the north of Australia. 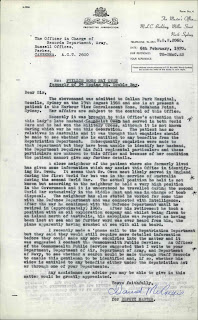 Once I had the correct spelling of his name it was easy to follow Launcelot and his wife, Phyllis as they traveled around the world. Launcelot's civilian profession was as a geologist and he is recorded on many passenger manifests as he moved from job to job. In 1933 he moved to Australia and is mentioned in many news paper articles. He spent some years working as the Managing Director of an onshore drilling company exploring PNG for oil.
From the records and letters I was sure that Launcelot and Phyllis didn't have any children so turned to the final problem of finding his family. I stared in the small Welsh village of Trefirw only to discover that every second family was named Owen. This shouldn't have surprised me. Luckily not many have the first name of Launcelot and I soon worked out his parents were named Hugh and Eleanor. From the census records I put together a family tree which consisted of Hugh's parents and his siblings but not much else. I wrote to the Trefirw Historical Society but unfortunately did not hear back. By now I had spent several weeks on the search so I parked it for awhile.
On 15 September 2013, quite by chance, I came across a post on the Great War Forum about the Owen's of Trefirw. I contacted the originator, Rich, and received a reply almost immediately. Over the the next 12 hours we established that the Owens that Rich was related to was not the family I was looking for. But this inspired me to look at Launcelot's case again.
Using another series of search combinations I stumbled across a family tree which had exactly the same details of the Hugh's generation that I had worked out previously. Following the tree I could work out who were Launcelot's cousins right though to the current generation. The one person I could identify has been completely uncontactable despite months of effort.
I then had to return to square 2. I had had little luck with Launcelot's father's siblings so I looked at his mother's family. Her name was Elenore (sometimes referred to as Ellen) Roberts. Her brother was Richard Rowland Roberts. To my surprise I found that his son, Roland Cecil Roberts, died in NSW in 1987. Thanks to another Ancestry family tree I have been able to contact Roland's grandson. After all that I'll soon be able to return the medals to Launcelot's second cousin.
Thanks go to Bev and John for wanting to return the medals. Thanks also to Rich who was very generous with his own families information. He also provided me the picture of the the headstone of Robert and Jane Owen, Launcelot's grand parents. Donna and the Dolgarrog Genealogy Group Face Book page were all very helpful. Final thanks goes to Mas who provided the final link to the Robert's family in NSW.
The returned medal tally is now 1536. 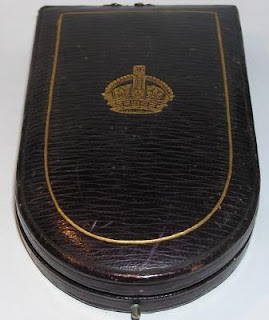 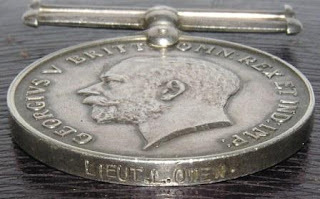 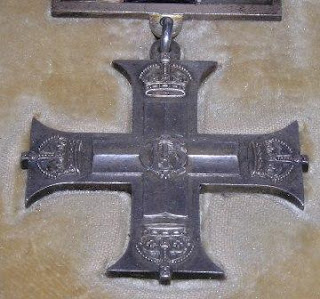 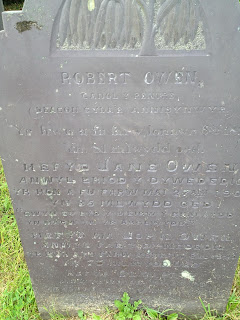 Posted by Lost Medals Australia at 20:13