As I said in my last post, every now and then we revisit old research to see if there is anything new.
Today I had a fresh look at the medals awarded to NX5179 James Edward Worthington. Bill had some information and to quote him the research was a 'shambles'. We had differing dates of birth for Worthington from different sources which complicated things but this wasn't uncommon for the time.
I couldn't work out exactly which James Edward Worthington I was looking for in the NSW electoral rolls as there were a few chaps with exactly the same name living in roughly the same areas of Sydney. The only fact I had was that James' NOK on the nominal roll was Isabel. On a hunch I looked at her history.
There was no record of a marriage or death on the NSW births, death and marriages website to a couple with these names so this stumped me. However, I did find the death of an Isabella Worthington on the Ryerson Index. Based on the date of death I found the death notice in the Sydney Morning Herald in 1968. The notice confirmed this was James' wife and it also gave me the names of their two sons.
This took me back to the electoral rolls on Ancestry and based on knowing the name Isabella I was able to pin point the Worthington family and get the full name of one son. This in turn lead me to a family tree on Ancestry.
10 minutes after sending a message to the tree owner I had a reply telling me that I had the correct family. This family has a strong military heritage with the husband of one of James' grand daughters having fought at the Battle of Coral during the Vietnam War.
After receiving these medals in October 2010 and running in to brick wall after brick wall for many months this search took a little over two hours from the time I had another look at it. Poor Bill, each time I asked him a question about his research I either worked out the answer myself or found information that made the question redundant.
These medals are from the NSW RSL Box and the returned medal tally is now 1164. 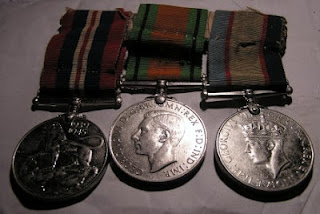 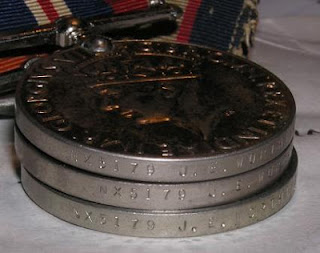 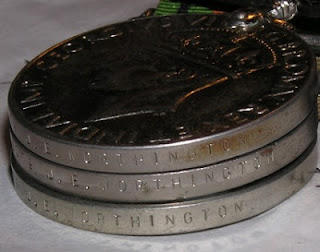 I've shown the medals exactly how they came to me. The mounting is very crude and the War Medal is around the wrong way. The full group consists of the War Medal the Defence Medal and the Australian Service Medal 1939-45.
Posted by Lost Medals Australia at 21:16