This return is very satisfying. The medal is just a single of a larger group, it is the Defence Medal which was awarded to most who served in WWII and there is really nothing special about it. However, it is all the minor things that make it special.
Most medals we return are to an infantryman and usually an other rank. This Defence Medal was awarded to NX57693 John Clark who was a Lieutenant and served with 112 Australian Light Anti Aircraft Regimental Workshop Section. This unit was responsible for maintaining and repairing the anti aircraft weapons used to defence against attack from the air.
Most importantly, this medal is being returned to John's daughter who we know is very emotional about getting this medal back.
This medal is from the NSW box and the returned medal tally is now 1060. 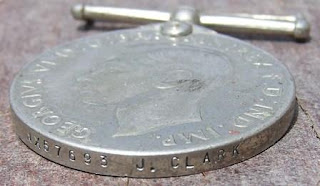 Posted by Lost Medals Australia at 12:36