The WWII group of six medals awarded to NX15378 James Haig Aitken were sent to me by the WA RSL. Aitken enlisted in Paddington, NSW although his locality is given as Leeton, also in NSW. Aitken died in WA which is why they came to me from that state but as it turns out the medals will be returned to Leeton.
This link is to the Australian Surname Group research thread about Aitken.
The medals returned tally is now 866. 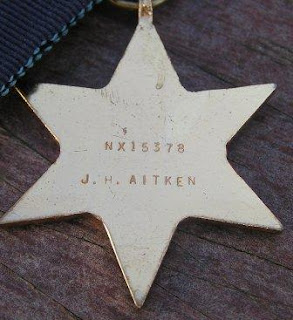 Posted by Lost Medals Australia at 21:33