This return is of the 1939-45 Star awarded to NX152551 Brian Joseph O'Rourke. Bill has been in contact with O'Rourke's neice and this is what we have been told:

'I would be honoured to keep Brian's medals with my paternal grandfather's service medals. My grandfather Frank O'Rourke (Francis) died in Concord hospital in Sydney when I was about 12 and had lost an eye at Gallipoli. He had a sword and a feather in his army hat. I think Brian lived with him for a long time when he returned from New Guinea. None of my family ever marched on ANZAC day but would catch up with their mates in town after the march, and even though we never missed going into the March on the 25th April in our best clothes and wearing rosemary, and honouring the returned soldiers, my very own closet family would not march. They did not find anything positive about their experiences and found it too distressing to be honoured for the destruction and loss of life of so many good men. Franks medals and personal items never surfaced after his death and were believed to have been stolen. The saddest thing I ever heard was that his faithful horse that carried him bravely through war had to be destroyed by my Grandfather when he was returning to Australia. The same was for all the men. That would be soul destroying to men who had developed such a strong bond with their faithful companion when home was so far away.'

Most amazing is that the medal will be returned to another member of the Australian Surnames Groups. The link explains the research and the connection. The returned medal tally is now 867 and this medal is from the NSW RSL box. 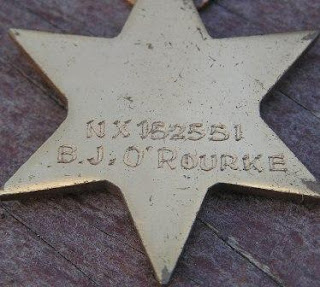 Posted by Lost Medals Australia at 00:57