The 1939-45 Star awarded to NX9084 Sydney WM Prisk came to us from the NSW RSL. Bill broke the code on this search and located Sid's nephew Bob who provided Bill with the following:
Sid spoke rarely of his war, usually, like so many of the soldiers, he preferred to talk of the humorous incidents, such aswhen his unit was withdrawing from Greece and he and two mates spent several days on the run, hiding from the Germans. When they finally made it to the beach, Sid announced that he could not swim. So they stripped off and his two mates dragged him through the surf, supporting Sid to the boat that was to pick them up. Several weeks later it was almost a repeat performance, when Sid who still couldn't swim and his mates were forced into the sea during the withdrawal this time from Crete.
Sid later returned to Australia and he then served in New Guinea. He was discharged on medical grounds in April 1945. Unfortunately, Sid was, at times, in poor health due to complications from his war service. He hung on for many years until his death in 1998. Sid had always remarked that he was too stubborn to give up.
The returned medal tally is now 859 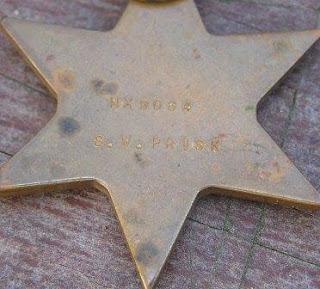 Posted by Lost Medals Australia at 21:09