I recently can across a forum discussion about a medal we returned a bit over two years ago. This link is to the story of the medal that was returned to the family of Major John Flood.
From the forum discussion I went to a link which provides a picture of Flood as well as the story of the WWI German raider the SMS Wolf. This is a photo which shows Flood and his wife Rose when they were prisoners aboard the Wolf. 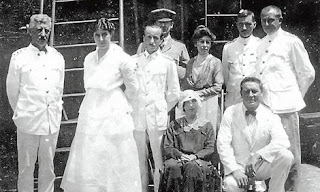 This is the review by Ross Fitzgerald of Richard Guilliatt’s and Peter Hohnen’s book The Wolf:

'AS A student at Melbourne Boys’ High School, I vividly remember our brilliantly wayward British history teacher, Ben Munday, recounting the exploits of the World War I German cruiser the Emden, which in just three months sank 15 Allied freighters. Captained by the aristocratic Karl von Muller – who deliberately avoided civilian casualties – the Emden daringly attacked the ports of Madras and Penang, in the process setting fire to Allied oil tanks and destroying French and Russian warships.
After the Emden was sunk by the HMAS Sydney off the Cocos Islands, British newspapers, including The Times and The Daily Telegraph, published tributes to Muller’s chivalry and courage, while the Chicago Tribune regarded the Emden to be ‘‘without parallel since the famous Alabama of the Confederate States was roaming the ocean’’.
What we didn’t know then was the even more amazing story of the elusive, heavily armed and elaborately disguised German raider-warship the Wolf.
For 444 days – from November 1916 to February 1918, without pulling in to any port and without any outgoing wireless communication – Captain Karl August Nerger guided the Wolf in an unbroken voyage of more than 100,000 kilometres. While evading the combined navies of Britain, France, Australia, New Zealand, America and Japan – which, as a result of an Anglo-Japanese treaty, was on the Allied side in World War I – the Wolf sank or damaged 30 ships totalling more than 138,000 tonnes. When Nerger finally returned to the German port of Kiel, out of almost 750 men, women and a few children on board only a handful of crew and prisoners had perished.
At long last, the riveting story of the SMS Wolf – which caused havoc to Allied shipping across three oceans – has been told in readily accessible prose and with one clear and consistent narrative voice.
Australian writers Richard Guilliatt and Peter Hohnen have produced a meticulously researched and beautifully written account of this ingenious German raider, which used all the latest technology of warfare – torpedoes, mines, cannons, smokescreens, incoming wireless receivers and its own seaplane, the Wolfchen – to inflict maximum damage to ships, including a number off the coasts of New Zealand and Australia.
At the same time, Guilliatt and Hohnen recount the fascinating interactions and often mutual respect that, over time, developed between the crew of the Wolf and the ever-increasing number of prisoners that Nerger insisted on taking on board. These prisoners included the Australian-born seaman and wireless operator Roy Alexander and an American captain, Stan Cameron, who was accompanied by his frail Australian wife Mary, who hailed from Newcastle, and their young daughter, Juanita.
The Wolf, a work in three parts, is a triumph and an example of truthful storytelling at its very best. What is fascinating is the comparison between the behaviour of the Wolf’s German crew and the scare-mongering, anti-Hun propaganda perpetrated by Allied leaders. Hatred of the Germans was perhaps expressed most vociferously by Australia’s combative wartime prime minister, W. M. (Billy) Hughes, a passionate Anglophile who was widely known as ‘‘the Little Digger’’. Even though Japan was our putative ally, he was also fervently anti-Japanese and fearful of Japanese expansionism.
‘‘Frail, tiny, partially deaf and plagued by chronic dyspepsia,’’ Hughes was ‘‘cold as sea-ice, vain as a butcher bird, sly as a weasel and mean as cat shit’’, the authors contend. According to Hughes, the Germans were ‘‘rapacious monsters who would subject the English-speaking world to mass slaughter should they achieve victory’’. World War I was thus a ‘‘racial war’’ that ‘‘necessitated draconian measures against all Germans, even those who had emigrated to Commonwealth countries and become naturalised British citizens’’.
Yet even though the pursuit of active enemy aliens was one of Hughes’s main obsessions and thousands of German ‘‘enemy aliens’’ were interred during the war, as Guilliatt and Hohnen point out, ‘‘not a single case of German espionage within Australia would be substantiated’’.
Prisoners aboard the German raider were treated as well as was humanly possible. During the long and arduous voyage, many forged deep friendships with their captors. Thus Alexander – who spent much time in the ship’s hospital and who could not help admiring Nerger’s skill and courage – later confessed: ‘‘It would have been impossible to have found a finer crowd of men to live among than the crew of the Wolf.’’
When the raider returned to Kiev, the indefatigable Australian medic Sergeant Alcon Webb – who died aged 48 in 1932 – wrote a heartfelt letter of appreciation to the Wolf’s doctor, Hermann Hauswaldt. ‘‘Sir,’’ Webb wrote, ‘‘I desire to express to you and your junior medical officer my thanks, and gratitude, for your courtesy and kindness to Corporal O’Grady and myself during the period we have worked under your supervision. I hope, Sir, that you and your medical colleagues will have health and prosperity and enjoy a well-deserved rest after such a long and arduous voyage.’’
Even Cameron and Mary – who was never to return to Australia – made it clear that not only did Nerger and his crew treat them and their daughter with utter decency but that during the voyage ‘‘friendships had developed’’, especially with the German officers.
In 1937 Alexander published The Cruise of the Raider Wolf – a colourful ‘‘recreation’’ of his experiences as a captured seaman. He was steadfast in his praise of his captors. Nerger, he avowed, ‘‘is one of the greatest seaman this world has known’’.
While Nerger all too briefly became a German war hero, Alexander became a chronic, mentally unstable alcoholic who died of liver disease in Victoria aged 53. Such is life and death.
This story of the adventures of the Wolf is one of the best and most gripping books I have had the pleasure to read all year.'

Both items are reproduced from the Sydney Morning Herald article on this book.
Posted by Lost Medals Australia at 22:56