NX8141 Stanley Peyton was a private soldier from NSW. His posting on discharge in 1945 was 103rd Australian General Hospital. He proved rather difficult to track down but Bill was equal to the task. Through his research Bill located Stanley's great nephew. Bill has a strong suspicion that the medals have been adrift from the family since Stanley died in 1962.
The family has a strong service history. Stanley's uncle was KIA at Lone Pine in 1915. His name was Henry Young.
The returned medal tally is 774 and these are form the NSW RSL box. 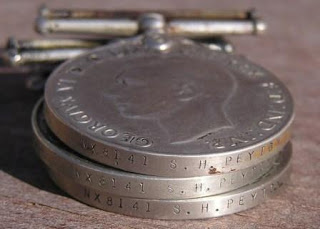 Posted by Lost Medals Australia at 19:08