I’ve often mentioned the great assistance we receive from the team of the Australian Surname Group or 'Yuku' from the web host name. Well this story is a bit closer to home for this group than normal.
We were searching for the family of NX150120 Herbert John MacDonald and Bill put a post on Yuku. The usual search process occurred and Bill received some great information to later use for searching through the electoral rolls. One of the clues was that Herbert’s son was named Robert. Then like a bolt from the blue one of the other Yuku team posts that Robert, or Bob, is the husband of her best friend. What a stunning coincidence. Here is the discussion thread on Yuku. Thank you very much to the Australian Surname Group for once again assisting us.
The medal returned tally is now 771 and yes these were out of the NSW RSL box. 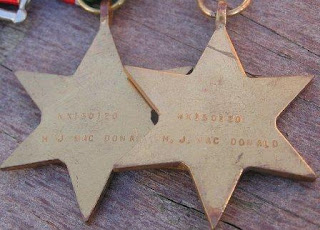 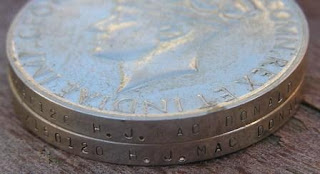 Posted by Lost Medals Australia at 22:45