This search was reasonably straight forward, the direct opposite to the tragic family story behind the medal.

My part in this started story on Friday when I received an email from Matt I who had the ASM 1939-45 awarded to NX37254 Glen Connell O'Toole. I only found three public records relating to Glen. The first was his birth record on the NSW BDM site, the WWII nominal roll entry and one electoral roll entry from 1954. A comparison of the BDM and WWII records show that Glenn put his age up by two years in order to enlist. More importantly, the BDM entry gave me his parents names. Using that information I worked out that Glen had four brothers and a sister. Glen didn't marry and the only descendants of any of his siblings are the sons of his sister Hazel.

This afternoon I spoke to  Glen's nephew Robert, who tells me that Glen and his brothers suffered as a result of their war service but this is only part of a tragic family story. During my research I found that Glen's father, John Martin O'Toole, died in an accident in 1922 when he fell 120 ft down a coal mine shaft. Glen was 3 years old when this happened and two siblings were younger still. 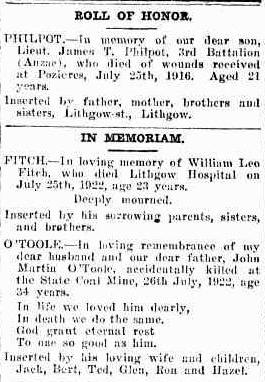 As well as the story of the accident, there were many stories about his wife's efforts to get compensation. She eventually received 500 pounds but it must have been very difficult to raise six children on her own.

Thanks to Matt who contacted me about Glen's medals and to Robert who gave me more background on the O'Toole family. The returned medal tally is now 2512.

Posted by Lost Medals Australia at 16:09