I've been slowly leopard crawling up on having returned 2500 medals for some time now. This search reflects the difficultly it took to get to this milestone.
It started with a Face Book post by Matt M who found the five medals in an old tool box that he bought some years ago. Matt has since told me that the tool box was purchased in the NSW Southern Highlands. This location subsequently made sense when I found where the veteran died and is buried.
The only clue to who the medals were awarded to is the engraved name and number on just one of the medals. I'll add the pictures at this part of the post rather than the end as it was the clues, or rather the lack of clues, from these medals which helped me put the full story together. 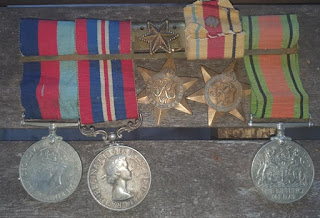 The number is immediately recognisable as a post WWII RAAF service number but the medal group didn't make sense as it looked to me to be British rather than Australia. I then realised that the medal on the War Medal ribbon is the RAAF Long Service and Good Conduct Medal, ERII version, and this is the medal which is named to E Revell. Revell's name doesn't appear on any of the DVA nominal rolls or in the electoral rolls. The only reference to him I found was in the 1963 Commonwealth Government Gazette which stated that his date of retirement from the RAAF had been extended to 1963. At this stage I still didn't know his first name.
I have a very good source who was able to access just one record that confirmed that the E stood for Ernest, his date of birth was in 1906 and that his NOK was his sister. No name for the NOK was given; just an address in Frankston, Victoria.
Using the first name and year of birth I found that Ernest was born to James and Harriet Revell in London. He was one of 14 children. The 1901 and 1911 UK census gave me all the name of this family except for the youngest who was born in 1913.
Just to confirm that I had the correct person I looked at the BDMs of several states and from NSW I found this death record.

All the names aligned and the death occurred in Bowral which is in the NSW Southern Highlands, where Matt found the medals. I couldn't find a death notice or any marriage records for Ernest and started to suspect that since his NOK was his sister, he hadn't married. I then found a picture of his head stone in the Woolongong Cemetery. The epitaph also suggests that he had not married so I was back searching for his siblings. 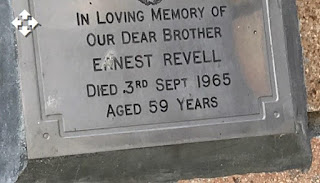 At this point of the search I was struggling how to proceed. It looked like all of Ernest's brothers remained in the UK and died there. I did find that Ernest emigrated to Australia in 1948. The ship manifest he was listed on gave the contact address for him and 16 other men as RAAF AOC c/- Canberra House London. I've surmised that Ernest was recruited in the RAAF along with many other former British servicemen. This explains the British WWII medals. The only other solid piece of information I had was the Frankston address of Ernest's NOK. Suspecting that this would have been current about the same time as Ernest was due to retire in 1963, I began a name by name search of the electoral roll of Frankston for that year. This particular roll is 166 pages and there are about 30 lines per page. It took several hours over a few days to get all the way to the letter H. I found a Elsie Ivy Hall lived that this address. A review of the 1911 UK census showed that one of Ernest' sisters, born in 1909 was named Elsie Ivy. This was enough evidence for me. Listed at the same address as Elsie was Walter George Hall. Locating a picture of Walter and Elsie's headstone gave me their son's name; Kenneth. 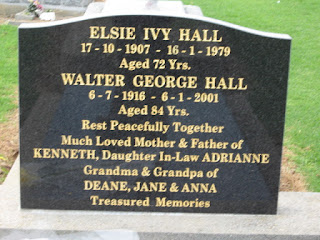 It then took a couple more days to work out that Kenneth's current contact details and it has been through his daughter Anna, that I've now been in contact with Kenneth.
Kenneth tells me he is sure that his Uncle Ern served in the RAF during WWII which confirms the WWII medals. Kenneth also said that Ern was pretty elusive and would just appear from time to time at his sister’s place. However, Kenneth rememberers Ern as a kind man.
The returned medal tally is now 2501.

Posted by Lost Medals Australia at 10:36