Another of Bill's successes.
This is a story from long ago which I've just wrote. It was not the easiest story to write, this is the first time I have sat down to try and fully record it. Pseudonyms have been used throughout, firstly to protect 'Eric', secondly others who were involved at different levels.
Eric was a POW of the Japanese and, who sadly, had been separated from his family for many years. When he died in 2002, he left his medals to a mate. Sadly, the mate who has since also passed, was burgled in 2004 and the medals stolen.
Where they went next I do not know, until in 2011 they ended up in the possession of the Victoria Police. In 2012, a newly graduated Constable who had been told to clean up the "Lost Property Room mess” passed them to me.
And so the search began.
In 2014, I found one of Eric's sons who admitted that he and his brother, had been estranged from their father for many years, and they did not know whether they really wanted their father’s medals. However, Eric's grandson who was present said that he would like the medals, the medals of a grandfather he never met. And so Eric’s medals have gone to a grandchild who for all his sacrifices he never met. A grandchild with whom I spoke at great length, and whom I hope left with a better understanding of what his grandfather had endured, firstly as a soldier and secondly as a POW.

The returned medal tally is now 2403. 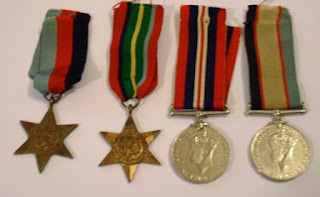 Posted by Lost Medals Australia at 12:05