I've mentioned before that any research relating to families from South Australia is difficult. This is because there are few public records available to access without paying a hefty fee. Other records like electoral rolls haven't been released to sites like Ancestry which, even though it is a pay for access site, helps to workout where people lived and who family members were. When I received this WWII group of 5 medals from Sharon G and saw they were awarded South Australian SX39977 James Richard O'Donnell I started to worry.
However, Ancestry did come through with a result and I found James included on a family tree. When I received a response from the tree owner the search got more interesting. Graham, the tree owner, had been researching James for a legal search rather than his own family history. Graham kindly made arrangements for the contact details of James' nephew, Terence, to be provided to me and we have now spoken. The medals will be returned to South Australia in the near future.
Sharon's name will come up in more upcoming stories as she sent me several medal groups.
The returned medal tally is now 2292. 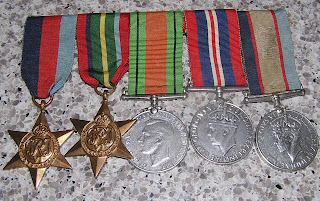 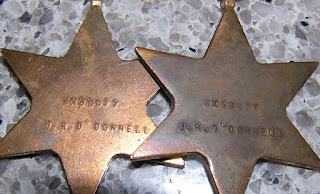 Posted by Lost Medals Australia at 17:27