The last four years has seen major battles showcased as part of the 100th anniversary of WWI. Perhaps it is only fitting that this story goes back to not only Australia’s, but also the Allies, first successful military campaign of the War.
Back to the 18th August 1914 when the Australian Naval and Military Expeditionary Force (ANMEF), a small volunteer force, marched through Sydney prior to embarkation for New Guinea, where they were tasked to seize and destroy German wireless stations in German New Guinea.
O/N 7351 AB John Searson Cantwell RAN, was one of the marchers that made up that contingent.
It is also fitting that John’s medals should come from Tony, a retired Lieutenant Commander, who while dropping off his own medals to be mounted, saw John’s medals for sale and purchased them.
I first became acquainted with Tony through the ‘VetAffairs’ magazine. Tonight I sent off an email whose introduction said it all “Tony meet Lachlan, Lachlan meet Tony”. At that point I bailed out leaving it to the two to get together so that the medals can be returned to John’s family.
John along with other members of the contingent returned to Australia victorious in January 1915, then on the 15th March 1915, they marched from Circular Quay to Victoria Barracks. Sadly John was  killed as a result of a motor accident and passed away without marrying.

The pictures are of John's WWI trio and of the ANMEF marching through Sydney.
The returned medal tally is now 2226. 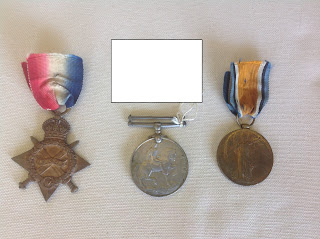 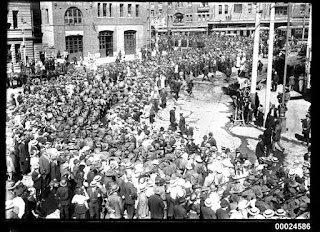 Posted by Lost Medals Australia at 03:58