WWI KIA with no know grave

This particular search started last week with an email from Trevor P of Bunbury WA. Trevor used to run a mowing business in Kalgoorlie and one day found a WWI medals awarded to 4791 Cecil Rourke. The story that unfolded is probably no different to many others that effected families of this time period.
Cecil was the son of James and Annie Rourke and born in Sydney in 1893. Some time before 1900 the family moved to the WA gold fields and lived in Boulder. Cecil enlisted in to the 28th Battalion  (12th reinforcements) AIF on 14 Feb 16 and joined his battalion in France on 28 Oct 16. His tenure did not last long as Cecil was killed in action between 3-6 Nov 16. Cecil has no know grave but is memorialised at Villers-Bretonneux.
Cecil wasn't the only member of his family to serve in the 28th Battalion. His brother John was in the 1st reinforcements. John enlisted in early 1915 and fought at Gallipoli. He was promoted quickly and was a Company Sergent Major at the age of 20. However, by Aug 16 he was discharged having returned to Australia with a disability.
It was John's service record which gave me the clues to find other family members. In 1967 John wrote to the Department of Defence and gave his address as 96 MacDonald St Kalgoorlie. A third brother was born in Boulder in 1902. This was William who was to young to serve in WWI but did enlist for WWII. This is a link to his service details. William did marry but I couldn't find any evidence that he had any children so I went back see if there was any other children. This is when I found Bridget Mary Rourke at the same address as James and Annie. There was no record I could find to confirm what the relationship was so I made the assumption that Bridget was Cecil's sister. It took a bit of searching but I found a marriage record for Bridget to Edward Burke but the only link I could find was that they were married in Boulder. Moving forward with this tenuous evidence I found that Edward died in 1934 but there was a son called Edward Cecil Burke. Circumstantial evidence at the best but I assumed that Edward Cecil was named for his uncle that was killed in WWI. Edward Cecil also served in WWII.
I still didn't have concrete evidence that all these people were related so I went back to the electoral rolls and found Bridget Burke, Cecil's sister, living at 96 MacDonald St Kalgoorlie, the same address John Rouke was living at in 1967. I finally had the evidence to connect everyone but working out the next generation proved almost as difficult.
Firstly came Edward and Bridget's head stone but nothing about Edward Cecil other than he lived in Esperance and his wife's name was Olive. Using every search variable I could think of I finally found Ted and Molly Burke. The details on the headstone gave the names of their two daughters. The search details I then had to use luckily gave me both ladies surnames from their marriages in the mid 1960s. I looked up one in Esperance and there she was listed in the White Pages. This was Annette, Cecil's great niece, and when I spoke to her today she was able to confirm all the details.
The next bit is a little unnerving. As I mentioned, Trevor lives in Bunbury. Annette is due to visit her sister Beryl next week and Beryl also lives in Bunbury.
I've added pictures of both head stones that I found on line.
I find it extraordinary touching that next week is the 101st anniversary of Cecil's death and his medal will finally be back with his family.
The returned medal tally is now 2172. 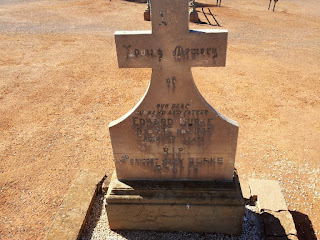 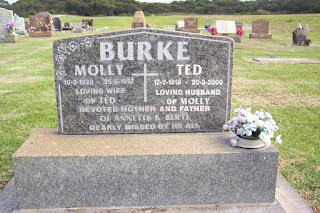 Posted by Lost Medals Australia at 15:52