This medal is another that was sent to me by Stuart H, the previous success was the return of the Ryan medal.
I was originally a little surprised by the regimental number which is five digits long. Just by the nature of the numbering by unit system used by the AIF it was uncommon for numbers to go beyond four digits, but that is a whole other research subject.
This BWM was awarded to 66878 William Frederick Burke and is impressed with his unit initials GSR. This, along with the longer than usual number, stumped me for a while until I found a reference to General Service Reinforcements. This was an enlistment arrangement used towards the end of WWI to fill individual gaps as it became apparent the war was drawing to close. I found this article to explain how soldiers who were GS Reinforcements would be employed. 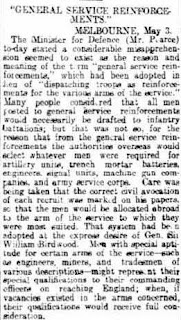 The GSR even had a dedicated colour patch.
William's enlistment date was in June 1918 when he was just 19 years. He was from Mogo on the NSW south coast. Mogo is well know to RMC Staff Cadets from my era as there is a large state forest there that was used as a training area.
Even though William missed the main effort for WWI he wasn't finished serving his country. He enlisted for WWII in 1942. However, it is a bit difficult to work out exactly what he did during his 18 months.
I was unable to find any evidence that William had any children but I have located a relative who lives close to me and I'll be meeting her shortly to hand over William's British War Medal.
The returned medal tally is now 2152.

Posted by Lost Medals Australia at 20:55