I was really perplexed when I recently received these medals from the NSW RSL. A WWII war medal and three US medals which have been professionally mounted so someone has gone to the effort to have the group made up.
This afternoon when I spoke to the nephew of NX58842 Laurence Francis Fox I finally understood what this group represented. Lawrie Fox enlisted in July 1940 but discharged within seven months. Lawrie enlisted to be with his brothers who were already serving. More about them later. He got through his training but when he arrived in Brisbane it was discovered he had rheumatic fever. This resulted in his discharge but while in Brisbane, and still wanting to serve, he joined the US Merchant Marines. This explains the single War Medal as his sole Australian entitlement and the addition of the Pacific War Merchant Marine, WWII Merchant Marine medal and the Philippine Liberation Medal. Lawrie didn't marry but did tell his nephew, Tom, many stories of his war time escapades.
Now back to Lawrie's brothers. The first to enlist was Ted who died of illness while a POW in Jan 1945. I've managed to find Ted's enlistment photo which is below. Also serving was Graham Fox.
Thanks to Lindsay from the NSW RSL for sending these medals on to me.
The returned medal tally is now 2092. 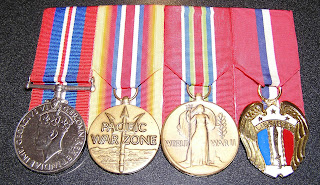 Posted by Lost Medals Australia at 18:41