The Pacific Star awarded to VX74647 Robert John Smyth has had a rather tough life. As can be seen in the picture, someone has defaced the naming in an effort to remove Smyth's details.
The medal came to me in 2005 via the Wagga Wagga RSL sub-branch after it was found near Rutherglen, VIC. 10 years ago there wasn't much information available online and all I could find was that his NOK was named Vida and in 1963 his address was care of a railway station in country Victoria.
Bill and I have put in quite a bit of research effort over the years but without any success. Today I revisited the research and had almost immediate success. One of the new resources available is a Victorian BDM search function. This provided enough information to work out that Smyth married Vida Thompson in 1937. Vida died in 1958. Using this information I found Vida on an Ancestry family tree and I've now been in contact with Helen whose husband is related to Vida.
The returned medal tally is now 1761. 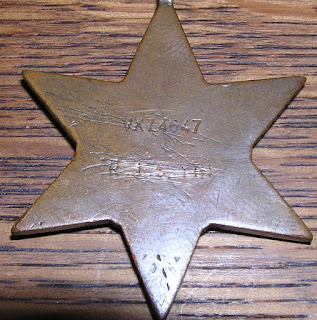 Posted by Lost Medals Australia at 18:30