Some of the information I found on the internet when doing this search was not what I expected. It might be better to start at the end and move backwards.
I have just spoken to Patrick and Barbara the grand son and grand daughter of 745 Albert Morley Gale. While I knew their names from the electoral rolls it was this story by Barbara's daughter Jenny that pointed me to the small town where Patrick lives.
Albert was a bank manager who died in 1937 in Yackandandah. He served in the 29th Battalion AIF. As Jenny's story says Albert was the nephew of John Gale whose name is familiar in the Canberra and Queanbeyan region. I now know that Albert died of a heart attack on the night of the Coronation Ball in 1937 and was buried in an unmarked grave. That was until his family placed a headstone on the grave in recent years.
The medal was sent to me by Paul O from SA who is a Vietnam War veteran.
The returned medal tally is now 1694.
Thank you to the family of Albert Gale for kind permission to publish his photo as part of this story. 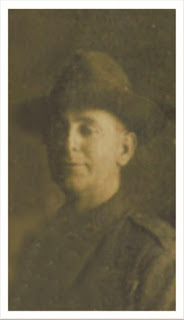 Posted by Lost Medals Australia at 20:15