This was another difficult search mainly due to the length of time since the medals were awarded.
This pair, for service during the Boer War, were awarded to 2899 Private J Monaghan who served in the King's Own Yorkshire Light Infantry. Luckily, the Queen's South Africa Medal has the initial J.J.B. which helped considerably.
Through a contact on the British Medal Forum (Bart), I received the following information:
John James Budden Monaghan. Born at Frimley, Surrey. Enlisted at Gosport, 2 March 1889, aged 15 years 4 months. Discharged on termination of engagement, 1 March 1902. Next of kin was his grandmother, Eliza Budden, of Prospect Place, Netherbury, Beaminster, Dorset. He also earned an India Medal (clasps Punjab Frontier and Tirah), and received a severe gunshot wound at Enselin, 25 November 1899.
This lead me to work out Monaghan's father's name was Samuel and mother Christiana. I then located him in NZ from 1906 to 1919 working as a tailor/presser. In none of the records was there evidence that he was married.
I have since found a distant relative who I'll return the medals to. Thank you very much to Margaret S who dropped the medals at my home this week.
The returned medal tally is now 1383.
Of interest, the QSA has the ghost date numbers that were removed from the dye when the war went past 1900. This is mentioned in the Wikipedia link I provided. 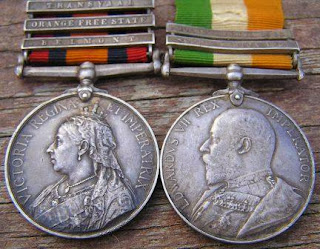 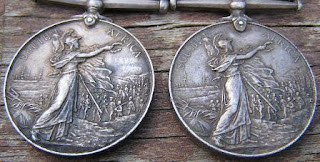 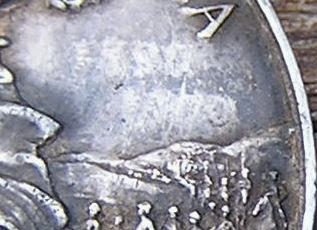 Bart of the British Medal Forum and Janet, who I'll send the medals to, have both supplied me some additional information about Monaghan.

From Bart: 'I had a quick look at the census entries too, and it struck me that Monaghan was rather alone in the world. His mother seems to have died at his birth, and his father (an Army Sergeant) does not appear to have played any part in his upbringing. He was educated at the Royal Military Asylum (afterwards renamed The Duke of York's Royal Military School), which was originally intended for orphaned children, so perhaps his father died when he was young too. His next of kin, his grandmother, died not long after he enlisted.'

From Janet: 'I have just discovered an Eliza Mary Monaghan who must have been a twin sister. She shares the same reference as John in the British Free BMD Births record. I think she must have died in infancy, but the only possible death record is for an Elizabeth Mary Monaghan; Age 0; at Hartley Wintney, Hampshire, UK.  I've just looked on the map and it's not that far from where they were born.
I've now found the death of a Samuel Monaghan in 1875 in Medway, Kent, UK; Age 32. He is living with his grandmother in the 1881 census.'
Posted by Lost Medals Australia at 20:32