This was one of those really complicated searches as Henry Hoskin had several variations of his name. Henry's service record shows that he served as 2385 Henry Arthur John Hoskin, 10 Bn AIF. (If the link drops out this tutorial will show you how to access service records).
I thought with that quite distinctive combination of names, tracking him would be easy. Henry originally came from South Australia which has the hardest historic records to track down. So that was the first problem. I then discovered that what records I could access didn't refer to Henry at all. So I went back to his father Alexander and mother who is referred to in one document as Julie Ann Coates Hoskin.
I played around with this combinations of names and over many days, I pieced together a family tree which showed that at different times family members had Coates, Coutts or Coats as either a middle name or as part of a hyphenated name, Coutts-Hoskin.
Using these new search parameters, I tracked down 2825 James Coutts Hoskin who was KIA on 24 August 1918, just 10 weeks prior to the Armistice. James is commemorated at the Villers Bretonneux cemetery. James NOK lined up with one of Henry's siblings so I knew I had the right family. The next step was the easiest and I found James on an Ancestry family tree and I was soon in contact with the tree owner, Ian. I also worked out that another of Henry's siblings served as SX7811 Private Daniel Hoskin during WWII.
Ian is Henry's great nephew and I'll return the medal to him shortly. Thank you to Andrea C who sent me the medals after seeing the ACA show on Anzac Day. The returned medal tally is now 1281.

The following photo is of the Villers Bretonneux cemetery taken in 2009. 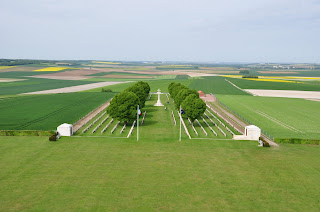