I have had a bit of difficulty with this search due to different records having the names Ernest David Davies  or David Ernest Davies. As Bill would say I had to run parallel research. Once I have narrowed done Davies through the electoral rolls I could continue to trace him through to his death in 1957.
The electoral rolls gave me the names of his children and even one grand son. However, there were too many people by the same name to narrow down who I was looking for in the White Pages. I let the search settle for a few months before revisiting Ancestry. I then found a family tree which included Davies. A message to the owner started a chain of events which put me in contact with the grand son I was looking for, Keith. I'll return the medal to him so he has them before Anzac Day
Thanks to Mike B who sent me the medals and to Steve and Geoff who put me in touch with Keith. The returned medal tally is now 1271. 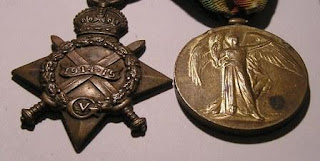 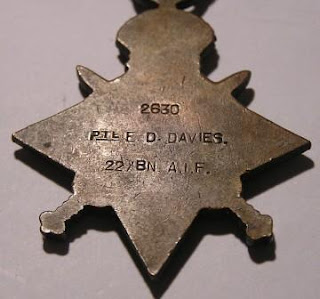 Updated 8 May 2013:
Today I received a photo of Ern's son after the medals had been returned to him. Thanks to Ern's grandson for sending this to me and his kind permission to use it. 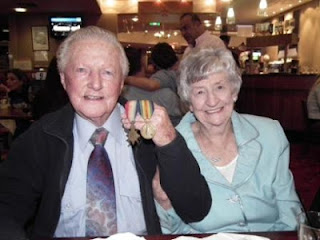 Posted by Lost Medals Australia at 18:51