681 Arthur Barnes was an early enlistee for WWI, signing up on 28 August 1914. When he enlisted he was the Town Clerk of Ulmarra in NSW. Being in such a position in the community might suggest that he would be commissioned. However, just like Burnett Gray from the St Kilda council, Arthur chose to enlist. He was one of the original soldiers of 1st Battalion, AIF.
The 1st Battalion, including Arthur, landed at Gallipoli on 25 April 1915. He was declared as missing in action on 29 April 1915 and later confirmed as killed in action on that day. Unfortunately, Arthur was reported as being injured and that he was seen by another soldier in August 1915. This information eventually filtered back to Arthur's family causing considerable confusion. Much of Arthur's service record is taken up with correspondence about Arthur's actual circumstances including letters written by a Member of Parliament. The slowness of communications and the lack of firm information added to the sense of frustration that can be read in Arthur's father's letters to the Army.
The search for a relative of Arthur's was very frustrating but I got there in the end.

Arthur Barnes was the son of Walter and Sarah Jemima Barnes (nee Ware). Walter and Sarah Jemima had three other children but none of them married. Sarah Jemima died in 1893 and Walter Barnes remarried Ellen Townsend who became the step mother to Arthur.
As Arthur's siblings did not marry that line of the Barnes family has died out. So I next started to look at cousins. This led me to Sarah Jemima's brother Uriah Walter Ware. Uriah married Sarah Kate Barr. This was her second marriage, the first to a Mr Moffat who died in a boating accident in the mouth of the Brisbane River. Uriah took Sarah Kate's children as step children.
I did follow another research path through the son of Walter’s second wife Elizabeth Ellen. Ellen’s first husband also drowned, this time in Mackay in 1886. Ellen had one son Samuel Edward Townshend. Samuel trained as a lawyer at Sydney University. Prior to WWI he was the Register at the University of Western Australia. Samuel was commissioned in to the 16thBattalion, AIF on 2 August 1914. Samuel was also killed in action at Gallipoli, this time at Quinn’s Post on 9 May 1915. In one of his letters to the Army about Arthur, Walter mentions Samuel’s death. I learnt a lot of information about the Towshend family from this link and would like to thank Colonel John Townsend and Doctor Richard Townsend for it.
Samuel was the last of that line of the Townshend family and given the step relationships on both sides of this family I believe that the Ware connection is the closest. I have recently been in contact with the step great great grand son of Arthur’s uncle and it is to this family that two of Arthur’s three medals will be returned.
These medals are from the NSW RSL box. The returned medal tally is now 1255. 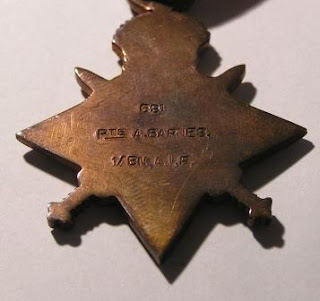 The following photo is of the 16th Battalion Officer's including Samuel Townshend. 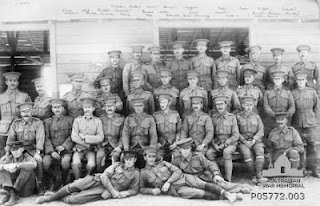 Update 13 Mar 15
Nick is the relative of Arthur Barnes who I'll be sending the medals to. He has done some searching of his own and come up with two articles about Arthur in Egypt and Arthur's father's obituary. 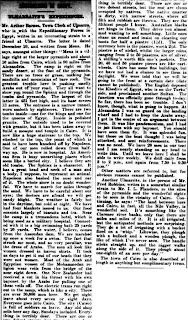 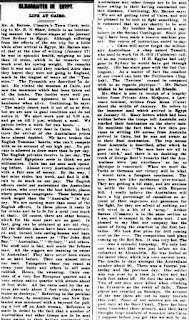 Source: http://nla.gov.au/nla.news-article16613760
At the same time I was looking in to this case, I have been researching an Albert Barnes and I did mix up the names Arthur and Albert but that is fixed now. There are also some formatting issues with the pictures and text I imported which I just can't quite fix.
Posted by Lost Medals Australia at 21:32