142165 Alan Raymond Arthur served in the Royal Australian Air Force for a period of almost three years. After initially researching a man with exactly the same name from the same small town in Victoria I realised I was going down the wrong path. These two gents were not related but once I started looking at the correct veteran in the records the search was quite easy.
I have just spoken to Mr Arthur's wife who tells me that Mr Arthur, now aged 92, is alive and well. I'll send Mr Arthur his medal in the very near future. Thanks to Richard D who sent me the medal.
The returned medal tally is now 1189. 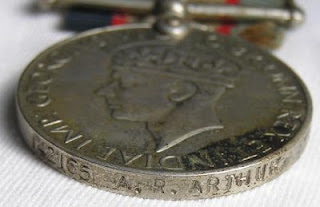 Posted by Lost Medals Australia at 16:15