This return has led to a rather amazing story.
I received the WWII War Medal awarded to 19223 Chief Petty Officer Albert Frederick Cullen in the mail yesterday. Within 30 seconds of opening the parcel I had found Albert on an Ancestry family tree so a message went straight off to the tree owner. I received a reply today from Albert's grand daughter and much to my surprise I learnt that Albert is alive and very well, aged 102.
Albert enlisted in 1929 and this link is to his service record. He served in the RAN until 1951.
From the electoral rolls on Ancestry I was able to trace Albert and his family as they moved around various Navy postings until they settled in Rosebud, Victoria. I lost all track of him in the late 1970s. From his family I now know that in retirement he had a desire to play bowls all year round so moved to the Northern Coast of NSW. This was at the same time as the online electoral rolls cease which explains why I lost the trail. In more recent years Albert has moved back to Victoria.
I've spoken to Albert's daughter, Faye, and his grand daughter, Carolyn, who have told me about his current links to the Scouts. Albert was a Scout in his younger days and as Carolyn said 'once a Scout always a Scout'. So at aged 102 Albert is probably one of the oldest Scouts still alive and has recently been involved with a local Scout investiture.
Carolyn has also provided me with a photo of Albert which I've added below the picture of his medal.
Thank you to Marcia S from Charlestown NSW who sent the medal to me in the first place.
The returned medal tally is now 1168. 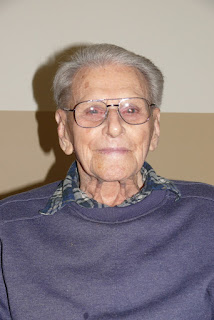 Posted by Lost Medals Australia at 12:53