This search had an outcome that I wasn't expecting when I started researching NX155505 Leonard Edward Seymour about 12 months ago.

The 1939-45 Star and Pacific Star awarded awarded to Leonard were sent to me by Sue M last April and since then each lead I had ran cold. Indeed, Leonard proved very elusive to track down. I now know that he distanced himself from his family and there is very little public information about him. All I had to work with was the name of his WWII NOK. This was his mother Nellie. From this I used the NSW BDM to find the names of all his siblings and his father, Leonard snr. I also found a couple other people with exactly the same name living in NSW. This made tracking the Leonard I was after through the electoral rolls very difficult. Leonard may have married in 1950 but there were no children and he may have died in 2004 but I couldn't be 100% certain.

When all the other leads dried up I went back to the NSW BDM and found two marriages for Leonard snr. The first to Nellie in 1921 and the second to Esther in 1967. This was the key to success. I used the combination off all the information I knew to be correct to find Leonard snr's death notice. I've added this below. What this gave me was the names of the other children and their partners. Leonard jnr is named on his own. 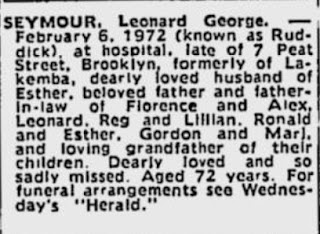 I then looked at family tress of the other children and followed Florence who married Alex Archer. They had several children and this is where I found the unexpected. One of Florence's sons was 2788583 Private Gary Alex Archer. Gary was a member of 9 RAR and served in the Vietnam War. On 4 Feb 69, Gary died of injuries he received in an accident at Nui Dat. Originally buried in Terendak cemetery,  Malaysia, Gary's remains were amongst those which were repatriated to Australia in June 2016.

I've now been in touch with Leonard jnr's nephew and his family. I think that a few missing pieces about the family might now be filled in. I also know that the family have great pride in their military history and that Leonard's WWI service will now take a place in the family history story.

Thank you to Sue for sending me the medals. The returned medal tally is now 2609.

Posted by Lost Medals Australia at 14:53