Medals awarded to New Zealand WWII soldiers don't come my way often. When they do it is usually because the soldier immigrated to Australia some time after WWII. This is the case with 24495 Frank Gaywood Eades.
Frank's medals came to me from the Albury RSL. The President of this sub-branch is a friend of mine and sent the medals to me with limited background information. I could follow Frank in the electoral rolls from the 1950s to the 1970. The only real lead I could follow was another name at the same address which I assumed to be Frank's son. Searching this name opened up what I believe to be the story of how the medal came to be sent to the RSL.
I found Frank's son's death notice from earlier this year in Alubry. It became immediately apparent that this gentlemen had lived in a care facility for more than 30 years. The medals came with the contact details of Frank's brother in New Zealand but these were no longer current. I surmised that after the death the care facility tried to call the family and when they had no luck sent the medals to the Albury RSL.
It took a bit to navigate the New Zealand records and indeed that branch of the family had moved on. As a last resort I used Face Book to message Frank's nephew and after a few days was talking to Mark and will send him the medals in the near future.
The returned medal tally is now 2258. 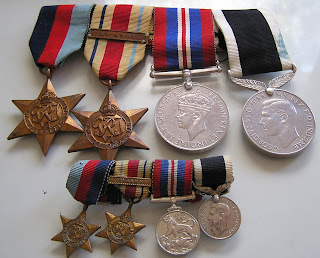 Posted by Lost Medals Australia at 15:32