Not much surprises me anymore when is comes to how medals are lost and found. Although I did wonder how this medal was found in Perth and the most recent information, from 2013, that I found about the recipient was that he lived in Orange, NSW.
The search started with an email from Dion of the Perth Ice Works who told me that one of the company drivers found it on a street. This is a National Medal awarded to Robert Gordon Shiel. I found a Bob Shiel living in Orange and fortunately he was included on an Ancestry family tree. A message to the owner soon got a reply from Bob. I had the right person.
Bob, who now lives in Perth, tells me that his Long Service Medal and National Medal were stolen on Australia Day. Bob received these medals for his time with the Rural Fire Service.
The returned medal tally is now 2202. 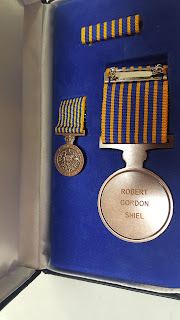 Posted by Lost Medals Australia at 05:57