This is one of those cases that Bill and I wished happened far more often.
This one started this morning when I received the Anniversary of National Service Medal awarded to 5716964 GNR G L Burnett. It was sent to me by the Berowa (NSW) RSL Sub Branch having been forward from the NSW Police. I knew that this soldier was from WA by service number beginning with the number 5. The first search I did of the service number gave me the full name of Graeme Leslie Burnett. I went to Ancestry and from the 1980 electoral roll found that Graeme lived in the WA town of Collie. From there I moved to the White Pages and found a GL Burnett living at the same address as in 1980 and now I had his phone number.
Within a minute of starting this search I was speaking to Graeme's wife and was told that three years ago Graeme attended an Anzac Day service at The Entrance, NSW. That explains how the medal got handed in to the NSW Police.
Thanks to the Berowra RSL, the $550 annual Ancestry subscription and the White Pages, Graeme will soon get his medal back.
The returned medal tally is now 2195. 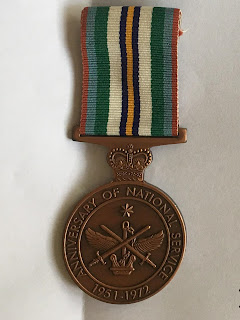 Posted by Lost Medals Australia at 06:48