Two KIA from the same family

This isn't the longest search I've done but there are some family complications that made it difficult.
When I read the service record of 2896 William Russell I didn't expect the story that unfolded. Firstly, his NOK was listed as his half sister, Janet Weir Rankin. Janet was also the beneficiary of his will after he was killed in action on 16 Jul 17. These decisions by the soldier didn't make it easy for Janet or her father Alexander Rankin to finalise William's estate. In 1921 the Army wrote to Janet  (page 35) to see if there were any other relative more closely related to receive his medals. Janet's response laid it out quite clearly. William was illegitimate and his father's whereabouts were unknown. To complicate this a little I found a memorial notice in a news paper which calls William Russell a friend of the family. What I couldn't confirm was if William's mother and Janet's mother were the same person. That confirmation was to come later.
What I could confirm was that Janet Weir Rankin was the daughter of Alexander Rankin and Alexander was married to Margaret at a time I couldn't work out. Margaret was the sister of Alexander White Weir. Alexander was also killed in action. His date of death was 23 Jul 17, only a week after William. Alexander was also in the same memorial notice which also states: 'our friend, William Russell'.
To add to the confusion a bit, Janet Weir Rankin married Alexander Smith and had a son also Alexander but he died as an infant in 1927.
It was at this point I found Alexander White Weir on the family tree of Ken C who has kindly allowed me to use his research in this post. Ken was able to confirm what I assumed as well as add a considerable amount of additional information.

This confirms the biological link between William and Janet and answers a whole lot of other questions. William's Victory will soon be returned to Ken. Thanks to Trevor R who sent me the medal.
The returned medal tally is now 2182. 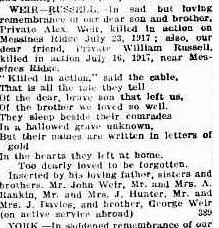 Posted by Lost Medals Australia at 03:28