Every now and then a punt pays off.
I've had the Australian Service Medal 39-45 awarded to 36413 Leonard Sydney Taylor for a month or so and had made very little progress. All I could work out was that a L. S. Taylor had married a Bonnie Jean Clark in 1949 in Grafton and I knew that Bonnie died in 2008. There is a L.S. Taylor in the White Pages in Grafton so I took the punt and called the number. Sure enough it is the Mr Taylor I was looking for.
Mr Taylor is a very sprightly 92 and tells me that he believed his medals were taken from his house about seven years ago when he moved out and that they were thrown in to Swan Creek near Grafton.
As can be seen from the pictures, the medal is quite pitted and not in the best condition.
Because Mr Taylor is still alive he is able to apply for official replacements of the medals that he is still missing. I'll provide him with the contact details to do this.
Thank you to Ann for sending these to me. The returned medal tally is now 949. 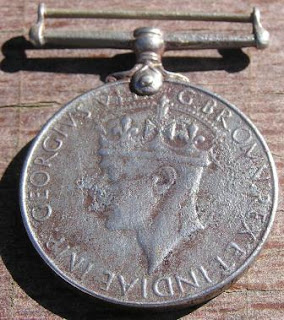 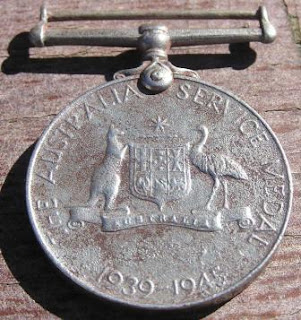